How to select the perfect fishing rod

In today's world one might get confused about what different manufacturers call their fishing rod blanks. Some call them 24 or 30 Carbon Ton. Others High Modulus or Intermediate Modulus, or 36 Million Modulus carbon. Whilst others call them IM6, IM7 or even IM12. So, what are those exactly?

First of all, carbon modulus is not a thread count and more exactly modulus equates to stiffness. The higher the carbon modulus, the stiffer the respective fishing rod will be. Another property linked to modulus is material’s measured strength. An acceptable strain rate for a fishing rod is approximately 700,000 or thereabouts. As the modulus increase, the strain rate would decrease, as such rods with a higher modulus blank are more prone to failure because of brittleness. To overcome this, companies such as SPORTEX and COLMIC, and other high end companies special engineer their rods to incorporate higher modulus blanks. This will increase the price of that rod. Equally, less known companies that manufacture somewhere in South East Asia using high modulus blanks might offer cheaper rods, but also brittle and prone to breakage.

Now, the IM rating. Apparently, that is a little bit of a myth and a marketing pseudo-tech spec. In reality, the IM rating a customer sees on a blank is somewhat of a replacement term for the universal standards. There truly is no such thing as an IM6, IM7, IM 8, IM12 etc. blank. The term "IM" seems to have come from a graphite/carbon company that was making different blanks for the fishing tackle industry, and on the sixth attempt or something they made one that they were happy with hence the term IM6. Since then, the trademark has passed on that name and some of the rod companies have continued using the term, claiming their blanks as being IM6, IM7, IM12, etc.

The true rating of graphite is Million Modulus (US standard) or Tonnage (world standard). Even million modulus term has been somewhat used loosely over the last few years; but, generally gives a close comparison. Tonnage is the one remaining rating nobody has used any different than what they supposed to.

If you compared Tonnage to the old IM6 from the first company, the 24 Ton blank is a fair comparison. More often than not, either you see 24 Ton or 24 TC or IM6 carbon printed on a carbon rod. They usually mean the same.

Generally speaking, a prestige German company such as BALZER uses IM rating not to confuse its customers, but because traditionally they’ve always done it this way and they don’t want to change. In their books, IM6 is 24Ton carbon, IM7 is 30Ton, IM8 is 36Ton and IM12 is 40Ton or 50-60Ton (depending on the range, and if they use nano-technology or not).

However, that doesn’t mean that everyone uses the right terminology when they apply the stickers on their fishing rods.

You need to be very careful these days.

If you want a cheap rod and you don’t care how long it’ll last or if you’d like to fish with for hours on end or if you aren’t interested on how it will perform when fighting a fish, then you do not need to read any longer. Just go to your local BigW or Kmart and you will find what you need.

If, however you want to know what rod you need to buy so it will last you for years to come, to trust when fighting the “big one” and be easy to use and a pleasure to fish with, depending the circumstances then you should consider a couple more points as per below.

…NOTE: We will have another couple of Blog Posts when we will discuss different types of rods, actions and when or where we should use each…

So, what you should look at when buying a rod?

First off, I would look for some prestige brands. Adore Tackle proudly represents two major rod builders: SPORTEX and COLMIC.

SPORTEX manufactures in Germany or Korea some extraordinary rods using Helicore carbon technology for their blanks and some ultra-high end Japanese/ German or Korean High Modulus blanks that are then engineered and rolled to create nothing short of masterpieces. The blanks are individually numbered and each rod has a 10 year warranty. Because of their technology, each rod is slightly different than the previous one, as such it can be tracked all the way to the respective batch that belonged to. That is a major difference compared to mass manufacturers from SE Asia.

COLMIC is an Italian brand that manufactures its rods exclusively in Italy or Japan using exclusively Toray carbon, Aerospace carbon fibres, etc. Some COLMIC rods are legendary in Brazil, US or Portugal, France and Spain (such as the ZERO SEVEN Surf rods) and cost thousands of dollars. Each COLMIC rod is nothing short of amazing and they back all their products by a 5-year warranty as well.

Just hold a COLMIC rod and compare that against other brands in the market today and you will see and understand the difference.

So, we covered now COLMIC and SPORTEX that use carbon ranging from 24Ton to 80Ton, Helicore technology, German/Korean made (SPORTEX) or Japanese Toray, ULAF Carbon, Italy/Japan made (COLMIC). We recommend these brands when looking at a high-end carbon rod.

If you want a high-quality rod and you want to look passed the above, then you should look no further than DAM, BALZER or any from the SERT range.

DAM offers tradition from 1875, German engineering and some high-quality rods that are all 24Ton to 40Ton graphite made on high quality carbon blanks, usually from Japan. DAM was one of the first to have introduced nano-technology in their rod blanks, and one DAM nanoflex rod test has been viewed by hundreds of thousands of people on Youtube:

BALZER uses the IM6-IM12 carbon rating on their blanks. However, that being said BALZER uses Japanese Toray carbon on their high-end ranges as well as nano-technology on some of its products.

Garbolino is the world benchmark in trout and salmon fishing using the VIPER technology for rod blanks that was breveted by Garbolino. The same technology is applied to the other “sister-brands”, under the name Carbon “Technifibre”. The 24Ton to 40Ton carbon confirms the blank quality and engineering is applied on top. All these rods are manufactured in Europe or Japan and Asia, depending on rod range.

Last, but not least- CARSON. They do manufacture their rods in SE ASIA, but are using 24Ton to 40Ton carbon sourced from Korea or Japan for enhanced quality.

Concluding on all of these-make sure you understand what you want and what you need. The higher the carbon content, more brittle the blank will be.

Going over 36 or 40Ton carbon implies risks and we strongly recommend you look at high end rod builders when you look for high modulus, fast action, ultra-light blank.

Fortunately, we’ve got you covered at Adore Tackle.

Because sometimes, only the best will do. 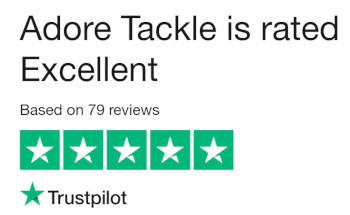