Everything you should know about Surf Fishing Rods (Part 2) 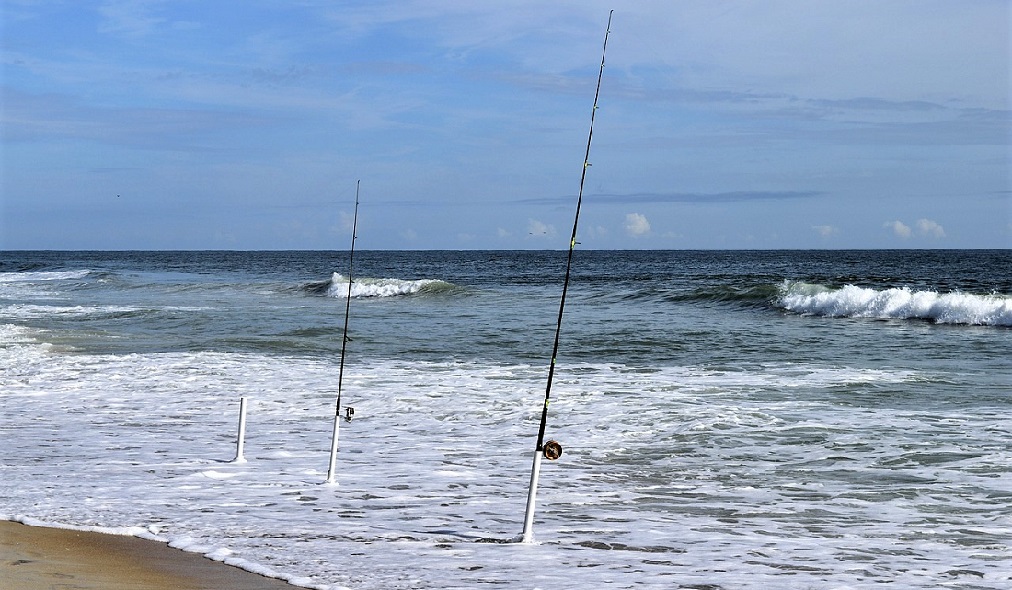 When the ocean is very calm, a long rod and heavy sinkers are not so important. I would argue that often, in such conditions, a long cast will probably work against you as you could well be casting over the heads of the fish that could be feeding just behind the first breaker. However, these calm conditions cannot always be expected. They are the exception rather than the rule. It is easy to shorten the distance of your cast in calm conditions whereas a short, incompetent rod will be useless when you need to cast longer distances in demanding situations.

Today I prefer a fast action surf rod. A fast action means that under load, either from casting or fighting a fish, most of the bend in the rod will take place in the upper third of its length. The bottom two-thirds of the blank will hardly bend at all. A powerful fast action rod is much better for distance casting. It will also have the power to spare when casting a slightly heavier sinker.

If you do not have the right technique, a fast rod action might work against you. As such you might want to have a look at a medium-fast rod (where 2/3rds of the rod bends when casting and playing a fish). Proper quality rods use only graphite or carbon materials in intermediate to high modulus and they impregnate those blanks with different resins to allow for further elasticity.

Fast action rods we would recommendare: Sportex Magnus Surf Turbo or the exceptional Sportex Magnus Surf DeLuxe as well as COLMIC MISAR SURF or SUNSET G-FORCE SURF rod. SUNSET Solica Hybrid and SUNSET FANTASIA HYBRID are both fast but then the force is distributed somehow more evenly in the blank as you fight an angry fish.

Remember: almost all fast and medium fast actions are made out of carbon or graphite.

If you are looking for slow action, then only glass fiber blanks will perform that way. Maybe some carbon-composite blanks as well, but not many.

If that's what you want, then a DAM Steelpower Pirate or DAM Fighter Pro Surf should be high on your list.

It is worth noting that a good surf rod from a top line manufacturer, such as DAM, BALZER, SUNSET, COLMIC or SPORTEX, will have its optimum casting weight written on the side of the rod blank, down near the handle, between the handle and the reel seat or between the reel seat and the first ring-guide. Usually, there will be a casting weight range displayed, such as 100-200g. To be perfectly honest, I’d be suspicious about buying any rod (surf rod or otherwise) that didn’t display it’s “recommended casting weight” range in this way.

It is also worth mentioning that many anglers believe that the manufacturer has probably allowed for a bit of margin either side of the recommended casting weight range. Nothing could be further from the truth. Following their logic and belief, they stick on a much heavier sinker with disastrous results. How? Well, the rod breaks in half when they try to cast with it. What I will use is something like lower casting weight +15% and higher casting weight -15% as the limits where I feel the rod performing best.

One other important thing we should consider here is that with most rod blanks, the rod will cast better towards the higher end than the lower end of the recommended casting weights. However, a rod that is not properly loaded during casting won’t find you as much distance. Equally a rod that is loaded to the max cannot withstand additional force applied to the blank so you cannot perform with it- for example- a pendulum cast. Going from a 120g to a 150g on a 100-200g rod model will often improve casting distance noticeably. This is because the lighter weight has not been “fully loading the rod”.

Obviously, at the outer extreme, a very powerful rod requires a strong fit person to obtain maximum tip speed during the cast. And impeccable casting skills. Without sufficient strength and casting ability, you still won’t be able to fully load the rod even if the sinker weight is a perfect match for that blank.

...We will have a separate article coming soon, covering all these types of reels and what to look for when selecting one surfcasting reel

Reels have also become much less expensive in recent years. A fixed spool (spinning reel) is by far the most popular choice for most surfcasters.

A spinning reel is also the best option for a complete beginner to cast and fish with.

You surfcasting spinning reel should be large enough to hold at a minimum 250-300 meters of 0.30-0.35mm (8-12Kg) monofilament. This is about the right line capacity for a surf reel. There are many inexpensive reels of this type available. Surf rod and reel sets can now be bought in for as little as $100. For a better-quality reel that will last a lot longer and perform better see the complete range of surf-casting reels from DAM, SUNSET or BALZER. Any of these reels would be a sound and reliable choice for a surf-casting angler. Carson has also some very interesting inexpensive models that will make many people happy with their choice.

This type of reel will be a tough proposition for a novice surf-caster to master. The spool inside the reel spins when you cast making it possible to cast a considerable distance in expert hands.

Free-spool reels will deliver excellent long-distance surf casting performance. However, you have to keep a couple of things in mind if you intend using one for surf-casting. You need a large model that will hold plenty of heavy line 20-25 lb. Lighter line can easily be crushed and nicked on a stony beach. You must have a quality rear star drag reel which totally disengages the gears placing the reel in free-spool for casting.

I personally love the PROWESS Darkstar 6006 and PROWESS Darkstar 8006 reels. Have an enormous spool, high quality bearings and run as smooth as silk. However DAM Quick Endura 555FS or DAM Quick Dragger 560FS are absolute top choices, exceptional built with only top quality components. You will be well served by any of these for years to come.

Free-spool reels require experience and a bit of thought before casting if you want to avoid the line to get all tangled-up (the dreaded “birds’ nests”). This is mainly caused by the spool revolving around the axis and removing line much faster than the sinker is taking it away. It can occur anytime, from early cast, in mid-cast as well as when your sinker splashes down the water. The way to do it is to tighten the adjustable free-spool rear drag so that the sinker (and bait) only drops to the ground in free-spool if you lightly jerk the tip of therod. When you first get to the beach it is best to slightly overtighten the free spool mechanism, to begin with, make a few casts, then back it off a little at a time. A sinker and baited hooks are more difficult to cast than just the lead because of greater wind resistance. For this reason, it is better to try to cast baits and sinkers of a consistent size and weight. When selecting a free-spool reel remember that a big heavy spool is harder to control than a small lighter one so just pick the one that will do the job, not the biggest out there.

That being said, a free-spool reel should avoided by the complete novice.

Whilst I still prefer the mono (old school, I know…) I have to admit that in recent years braided fishing lines have all but taken over the market. Unlike monofilament, braid has almost no stretch which means it is far easier to feel a fish biting from very long distances. In other words, it increases your chances to hook the fish.

Braid is much thinner in diameter than monofilament for a given breaking strain meaning you can put more line onto a smaller reel. Fine diameter braid also casts further and cuts through wind and water much more easily than monofilament. Nowadays braid is also much less expensive than it used to be. However, you should pay attention and be careful casting braid with a spinning reel because it can easily cut your finger to the bone!

It is a good idea to wear a finger protector when casting with braid. The best alternative is to use a heavy monofilament or fluorcarbon shock leader at the end of the braided mainline.